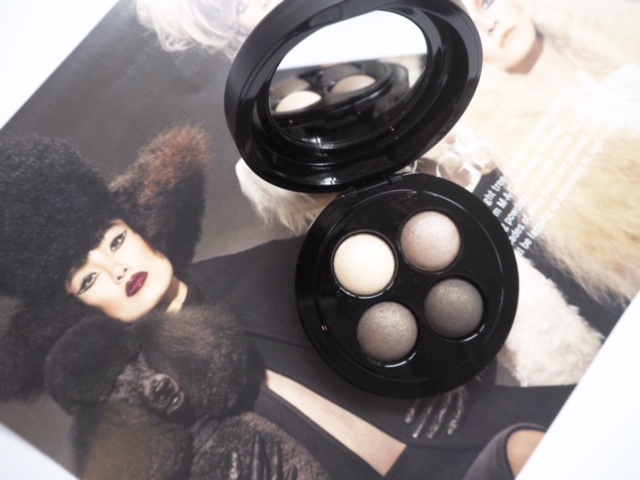 So, the MAC Haute Dog collection could not be more up my street for its inspiration – if you read BBB often then you’ll know I’m weak for dogs. I guess what it’s actually saying is be as pampered and moody as the most indulged of pooches. I dare not, obviously, show this to Honey who is lying beside me looking all things scruffy in comparison to the top dogs in the picture!

As ever, there are limited editions, including the Mineralize Eyeshadow Palette above in Posh Pedigree, but there are two others, not limited, called Pure Bred and A Glimmer of Gold.

I’d wear (and will) all these shades – I like that this particular mineralize formula has got a lower shimmer than usual. It’s £34.

For lips, there are five limited Mineralize Rich Lipsticks – here I have Nose For Style and Rare Breed. They’re pretty low key – Rare Breed is claret red and Nose For Style is a pinky nude. I don’t find them to be over-pigmented so they’re on my ‘safe’ list! They’re £21.

I have one of four Mineralize Glass – in Dressed To The K9s (the naming department had fun here, didn’t they?) which is a deep wine stain but also quite sheer – if you thought you couldn’t do a vampy lip, you can kind of do a half-vamp with this! It’s £20 and joins Lap Dog and Sheer Coincidence (did you run out of dog words?) as limited editions. I HAVE to get my hands on the limited nail polish for this collection because it’s called Very Important Poodle!

MAC Haute Dog is a small (comparatively) collection launching on 3rd September. Really, it’s all very wearable and safe, particularly if you like nudes and neutrals, and it’s going to suit most skin tones I think. I kind of just wish, wish that they’d popped some dog designs onto the bullets or something just to ramp it up a bit. Or done a Paul & Joe with the lipsticks…