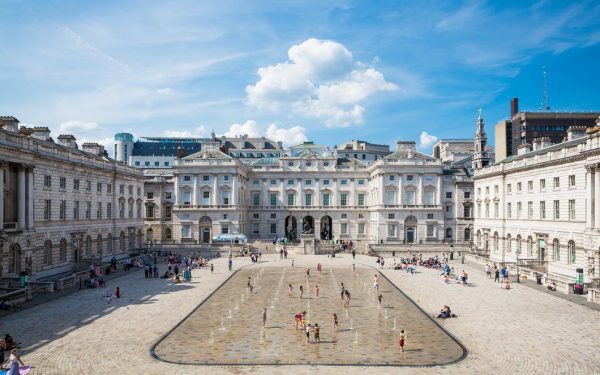 Eating At: Gymkhana, Albermarle Street. We took a friend for his birthday to Gymkhana at Albermarle Street. It’s a whole other level of Indian food and quite an experience. We get take-aways quite often, but this is so far away from that you can’t even begin to compare the two. I think it was nominated as best restaurant at some point but really, that’s subjective so doesn’t make any difference to the experience you have on the night that you go, but it is Michelin starred. If you’re not experienced in spicy food, this is going to feel hot – all of it! My friend said she could taste all the spices through the heat but until I got used to it, all I got was the heat! The service was impeccible, friendly and delightful, I had the best dosa I’ve ever had (Dosa, Mysore Sabzi, Coconut Chutney) and if you’re wearing a white shirt, avoid the Gol Guppas – little hollow pastries that you fill with curried water. Sittings are two hours – I understand, but it’s still annoying – so we disappeared off for desert wine by an open fire with blankets in the outdoor bar at a hotel.

Reading: About Bee Venom. So, Caroline did a great job of explaining why we probably don’t want to go anywhere near snail slime in our face creams (HERE), and Hayley, likewise, with her recent piece on mink lashes (HERE), something I’ve long objected to, so I thought I’d weigh in on Bee Venom, because I’ve had a timely email from Bee Good. I never feature bee venom products on this blog (nor mink lashes, nor, knowingly, snail slime, but had a little slip up on IT Cosmetics recently – I didn’t know.. honest). When you research how bee venom is harvested, there’s very little, but a couple of years ago, when I was already wondering how venon, which is the result of a stress response, could possibly be harvested ethically, I found some bee electrocution panels and it all started to become clear. To quote from the Bee Good (who don’t use venom or royal jelly), “To harvest Bee Venom a frame containing an electrified grid is placed at the entrance to the hive. As the bees land on the grid an electric current passes through them, in effect giving them an electric shock – they react to this by stinging through the grid and their venom drips onto a plate below where it is allowed to dry and be collected later.  Whilst the electric shock itself doesn’t kill the bees, the release of venom puts the entire hive on alert and more and more workers exit the hive to try to deal with the perceived threat.  This can put the colony under stress and it can take several days for the beesto replenish their stocks of venom making the colony vulnerable to attack. So at Bee Good, whilst it is not proven that bees physically suffer from the electric current they are subjected to, we don’t believe that treating our bees in this way is “cruelty free” and therefore we actively choose not to use bee venom in any of our products.”

What I didn’t know about is Royal Jelly. I’m quoting again from Bee Good because they’ve explained it so well.  “Royal Jelly is normally produced by special glands within the worker beesheads and fed to all baby bees soon after an egg is laid in the cell. Unfortunately thousands of baby bee larvae destined to become Queen bees are killed in order to collect this ‘precious’ Royal Jelly. The eggs that are selected by the colony for greatness as a future Queen are fed on Royal Jelly exclusively. In order to harvest in commercial volumes, frames of newly created Queen cells are placed inside an otherwise Queen less hive so that the workers deposit large amounts of Royal Jelly into each cell. After about 48 hours, the frames containing the Queen cells full of Royal Jelly are taken from the hives and the maturing baby bee larvae removed from the cells and simply discarded before the remaining Royal Jelly is vacuumed out of the cells and collected. This process leads to the death of thousands of baby bee larvae and is something we at Bee Good simply can’t contemplate as being either ethical or cruelty free.” Quite right and thanks for explaining, Bee Good! You can find Bee Good Products HERE.

Buying: Flamingo Sweatshirt from Wildfox. My thing for flamingos has not yet passed so I gave into temptation (and also to cheer myself up for turning up to an appointment a day early – argh!) and bought the Wildfox flamingo sweatshirt. I have not wanted to take it off! It’s roomy, super-soft and probably the most comfortable thing that I own. It’s £120 HERE. Everything I’ve ever had from Wildfox I have worn into the ground.

Studying: Passing Off Laws, AKA Duping. I’ve been doing a bit of research, since it’s such a hot topic at the moment, on duping. In the beauty and fashion industry, it’s known as ‘passing off’. Bear in mind that I’m not a lawyer though and it’s a layman interpretation.

First, and most important to understand is the intangible asset of ‘goodwill’. You might define this as reputation, built from branding and presence – something that has no specific definition but exists as part and parcel of a brand. For example, you could not physically inspect the reputation of, say, Estee Lauder, but consumers are aware of its generally good and solid nature. I’ll call the complainant A brand and the defendant B brand going forward.

So, if a case comes to court, goodwill is one of the aspect that will be looked at and whether the injured party’s goodwill is damaged by a dupe. Another aspect that would be considered is whether the passing off, or similarity in looks, leads the consumer into thinking they are buying goods from A Brand. You then have to consider that if you a consumer buying B Brand, that looks very similar to A Brand, in an environment that A Brand is never usually found (i.e. a supermarket, a pound shop) it would be reasonable to assume that they would not think it to be Brand A. Even if they do, confusion around it doesn’t interpret into misrepresentation. Nor can confusion be understood to be deception. It’s not necessarily assumed that the consumer would infer that because of a similarity in looks it was produced by the same manufacturer. For a passing off claim to be successful, it seems that the products must fall under misrepresentation, which itself means that Brand B was implying that they are Brand A. Sources: InBrief and TheIPKat.

Waiting For: Perfume at Somerset House (main picture). It’s not too long to wait now until the exhibition, Perfume: A Sensory Journey Through Contemporary Scent opens at Somerset House in June (book your tickets early because I think this one will be extraordinarily popular).  Co-curated by Odette Toilette (above), it’s described as a ‘Multi-sensory exhibition featuring ten extraordinary perfumes and their pioneering creators, who have radically changed our perceptions of fragrance over the last 20 years.’. Describing scent as ‘the unseen works of art worn on our skin’, the exhibition is a comprehensive examination of the changing nature of fragrance. I’m not surprised that Secretions Magnifiques, Etat Libre D’Orange is one of the ten – launched in 2007 it was rather ahead of its time and I literally could not believe my ears as the PR explained that it’s notes include sweat, blood, semen and saliva. I’d probably take that over Angel (bleugh) any day of the week, but it’s not something you expect to be discussing over scones.