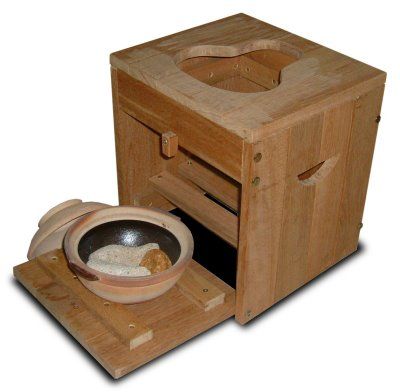 I just can’t ignore the level of interest in this, er, treatment, that’s been brought to our attention by Gwyneth Paltrow’s site, Goop, thanks to a salon in LA deciding to offer the treatments. I had to Google how to do it, because I honestly didn’t remember, but believe it or not – I blogged about this trend in 2012! I can tell you exactly who brought it to my attention – Wahanda. The post is HERE.

There’s also a boy’s version – The A-Steam. Good for piles apparently. So for everyone wondering exactly how you steam your vajayjay, don’t worry, you won’t have to hover precariously over the hob, there is equipment for this! The treatment known as Chai-Yok, and the steaming involves stripping from the waist down over an open-seated stool with a boiling pot of mugwort tea strategically placed beneath. No open-seated stool to hand? Then it’s off to Homebase to buy a saw and modify one of your chairs. There isn’t really any getting around the stool with a hole in it thing unless you maybe cut the bottom off a bucket or something. After you’ve placed your cup of hot water or infusion under the hole, you sit, and surround the bottom half of your body with blankets or towels so that the steam doesn’t escape. When you feel fully, er, cooked, get off.

While this might seem like a strange practice to us, when I blogged about a heated sanitary towel from Japan, I got lots of comments from Asian readers saying they used them all the time and they were helpful, even though I thought it was hilarious. Global traditions might seem strange to us, but I’m not going to join the baying crowd that deem steaming a dangerous thing to do. Quirky and curious, yes. Funny, even…like, who has time?

If blogging has taught us any one thing, it’s to be accepting of different health and beauty traditions and cultures – look how we’re embracing the whole Korean beauty thing right now! While I can’t recommend Vagina Steaming exactly because I’ve never done it, remember it’s a ritual steeped in ancient history and culture. I genuinely have no clue if helps with fertility or periods, but like anything that bothers you, helping yourself is often the first step to healing in many ways, so let’s not write off something that an entire nation embraces. The Guardian is quick to say that it could cause all kinds of health issues, but I don’t think I’ve ever heard that Korean women are beset by furious outbreaks of thrush, as suggested. I’ll just throw heated car seats as an example of how you’ve probably heat treated your vajayjay without even realising it and there’s no doctor writing for the Guardian saying it’s dangerous to have a warm bottom in winter, is there?

Personally, I won’t be asking Mr BBB to carve a hole in our kitchen chairs (thinking of a very wonky doll’s house he made that alerts me it wouldn’t go well) but quite honestly, fertility and period pains aside, it’s so damn cold in the UK right now I’d be grateful for some hot steam anywhere on my body.