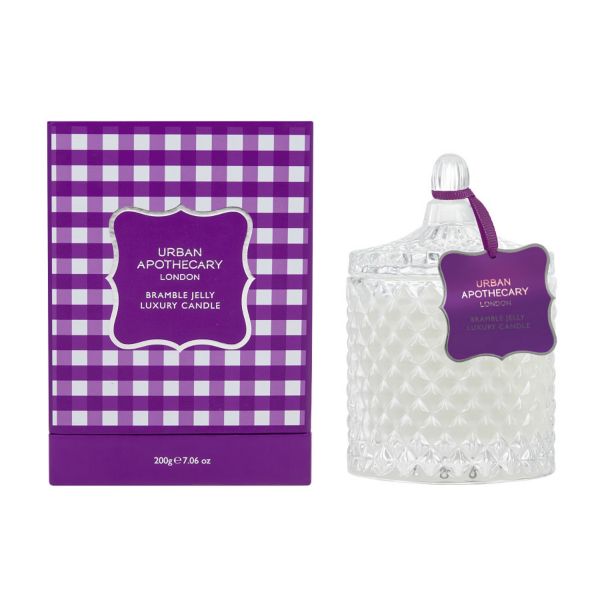 Bearing in mind that there’s almost no scent known to man that hasn’t been converted into a perfume, candle or spray (thinking here of The Moon by Cire Trudon and Lady GaGa’s offering of fragrance with blood and semen notes.. ) it’s almost miraculous that along comes a concept that I haven’t seen done before.

Urban Apothecary London Jam & Preserve collection is exactly as it sounds – everyone’s done the cake in various forms of vanilla overload – nobody thought to do the filling. Representing traditional and yesteryear afternoon tea, I think this is the loveliest of ideas. The soya wax candles come in four variations; Lemon Curd (notes of lemon, coconut and vanilla), Apricot Preserve (apricot, peach, melon and rhubarb), Bramble Jelly (raspberry, blackberry, florals and vanilla) and Orange Marmalade (sweet orange and tangy ginger), all of which come in a glass ‘preserve pot’ taken from original 1920’s design).

This is such a beautiful concept – I’ve known the Urban Apothecary brand since its very first day so I know there is no compromise on quality. I can see these candles making it onto every single beauty and home magazine page for the sheer delight of them.

If cake isn’t your thing – what’s not to love about a cup of tea? The gorgeous tea-scented candles come in three varieties.. Chai Tea Masala, Earl Grey (above) and White Tea – they’re £35 each. I don’t know why I’m not seeing these everywhere – they’re stunning! They’re HERE.