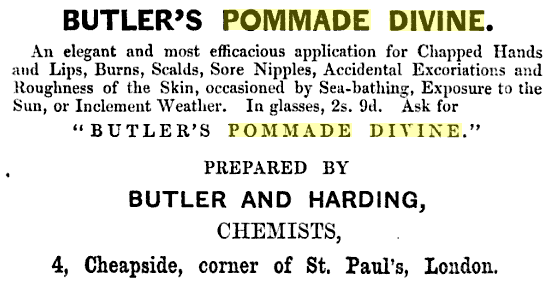 Where to start with the history of Pommade Divine? This product deserves a book written on it, but I’ll explain as much as I can in a blog post!

I think we could say that Pommade Divine is an ‘everything’ balm. The first ever mention of it is in a letter from a Bavarian Princess (great grandmother of Marie Antoinette) who was born in 1652. While she loathed Epsom Salts (yes, who knew they were around so far in the way back?) and baume blanc (whitening creams) she had nothing but praise for Pommade Divine. Back then, Pommade Divine was constructed very differently to how it is now – thankfully the beef fat has been removed! But, it was pretty much the staple for the ‘upper’ classes right back then, when anti-biotics and anti-septics didn’t exist. It made me think – if you cut yourself or bruised yourself back then, how could you stop infection? Sanitation was basic and I suppose you could quite literally die of a paper cut.

Pommade was a catch all word for a ‘healing cream’ and as you can see from the advertisement above from 1800 or near, it’s a cure all although I dread to think what an ‘accidental excoriation’ might be. I won’t ask. Mrs Beaton even concocted her own recipe for the marvellous healing cream. But, Butler’s Pommade Divine became one of the best known, and it’s this that forms the inspiration for the 2015 version. Butler’s was considered superior, although more expensive, because they included rare for the time ingredients such as cinnamon, benzoin, nutmeg, clove and styrax.

If we fast forward through the Mitford years (the Mitford sisters were big fans), Pommade Divine became known as ‘Nanny’s Cream’ because it was a staple in all aristocratic nurseries. What I find interesting – and testament to the integrity of the brand – is that the new owner, Diana Heimann (former Vogue editor) employed a historian to trace the history of Pommade Divine. There’s a time line on the website that gives peeps into the lives of women throughout history and their use of the pommade which is fascinating on its own and very well worth a read.

So, what of Pommade Divine now? It’s restored to the natural antiseptic and anti-inflammatory Butler’s recipe from 1800 although replacements have been made for the beef fat for example, with shea butter, jojoba and lanolin, but the pommade contains no mineral oils, no synthetic dyes or fragrances, no parabens and no silicones. And, the original spices are still all there.

I’ve seen a lot of ‘everything’ balms but I like this one for not being too oily or too pungent, and you can use it for sore paw pads on dogs – that’s the icing on the cake.

I’d recommend you read the site timeline – it’s not very often brands can boast such a history as this which makes it a stand out. Pommade Divine has gone up a little in price since 2 shillings – it’s now £19.80 HERE.  It would be interesting to do an inflation calculation on this to see how much in today’s money Pommade Divine was.