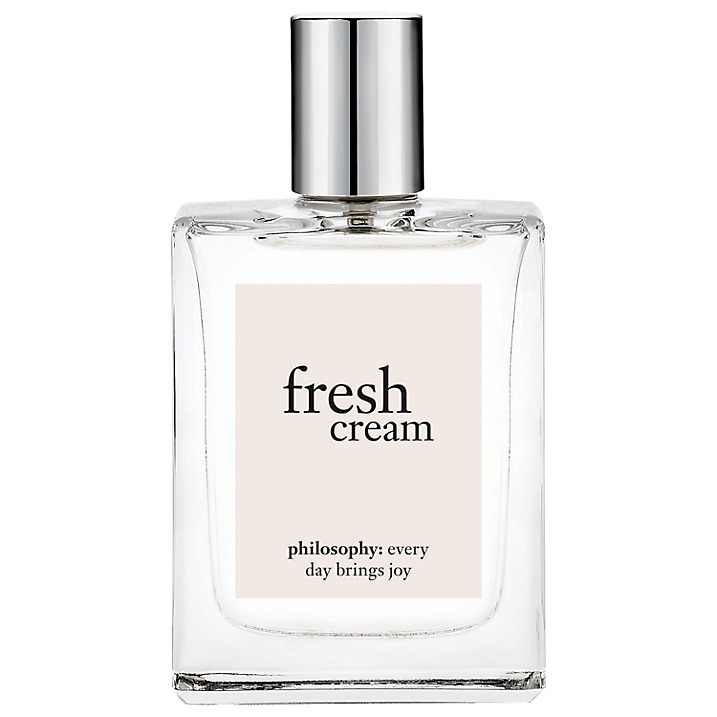 Think more creme patissiere than freshly whipped, and you’re along the right tracks for the new Philosophy fragrance. I’m hugely a fan of Philosophy fragrance – they don’t get nearly the recognition they deserve, in my view. I can liken them in fragrance style (although not exact scent) to Bobbi Brown Beach and that whole simple, skin scent genre. Nobody’s pretending that these were created in dusty French basements by secret aroma alchemists and that’s what I like about them – they aren’t in the least pretentious.

So, Philosophy Fresh Cream Fragrance is a spin on gourmande perfume but has a more milky backdrop. It’s definitely sweet and undeniably vanilla laced, but more like liquid ice-cream than cake. It’s a strange one for sure and you’ll either love it or you’ll hate it. I think this fragrance really drags at your olfactory memory – there will be someplace, sometime where this smell resonated for you as a child, and that’s why I think it will tug at your heartstrings without you realising why. It’s reassuring, comforting but also has a lightness and freshness to it.

When I tried it, it didn’t last the whole day – you’ll need a refresher spritz midway though, but actually, if you want to change it up in the evening, that’s not such a bad thing. Nobody wants to go on a date smelling of milk gums.

I know John Lewis are stockists so do take a moment next time you’re in to test it out – I’d love to know what you think! Philosophy Fresh Cream is £34 HERE.