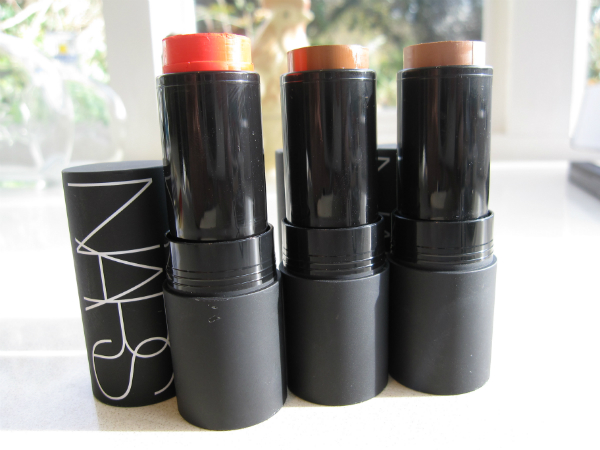 I’ve got a few of the NARS Matte Multiples to swatch up – I have to say, there is one shade in there that I am already obsessed with and it’s not the obvious one! When NARS Multiples first launched they were quite incredible to beauty eyes that had never really seen such a thing – the idea came from using lipstick as a cheek highlighter, something that make-up artists had no doubt done for years but had never really translated to consumer products.

Orgasm, translated from the original powder version, was the one that made the big splash – although it’s still a best seller it seems a little dated and it’s all kinds of hell if you’re not a frosty pink shimmer fan. NARS Matte Multiples feel much more ‘now’ without shimmer – they’re dense in pigment (if you choose Siam, the brightest in the picture, go very, very light at first otherwise you will get what I had – a bright pink-orange cheek that doesn’t want to come off) so a little goes a very long way.

The shade that is now my new obsession for cheeks is Altai, the furthest away in the picture and a warm beige shade. My complexion is olive, and at the moment it’s a pale olive – adding a deep warm beige shade as blush brought it back to life in an instant. The middle shade is Cappadoce and I imagine I might use this when I’m tanned, but it looks very deep to me so I’m not sure about it. You can, of course, use Multiples for lips as well, but actually, I think it’s a formula that belongs on cheeks where it performs the best. I think the NARS Matte Multiples are expensive at £30, but are so pigmented that they’ll last a long time.

You can find these on a SpaceNK exclusive from mid-next week, and from April, they’ll be available everywhere else.