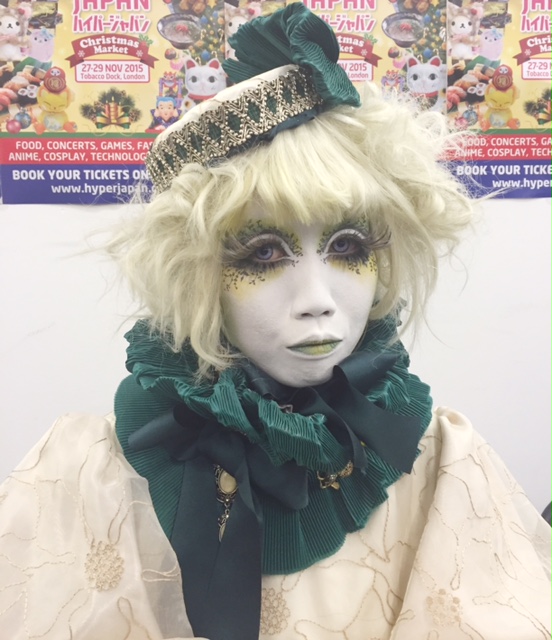 If you were following my Periscope on Friday you’ll know I was visiting HyperJapan at Tobacco Dock. It’s a celebration of all things Japanese including fashion subcultures, often derived from traditional and ancient Japanese arts. So it is with Japanese Shironuri Artist, Minori, whose face is her art. I was completely entranced by her makeup – a completely white face with intricate paintings over the top.

I have to say that Minori speaks no English so everything had to go via the translator so it wasn’t the easiest of interviews, but Minori is the sweetest thing. She couldn’t have been more accommodating or polite and I literally could not stop looking at her.

The first thing I wanted to know is whether she uses makeup or stage paints for her look. Turns out that it’s stage paints from a brand called Mitsuyoshi – quite literally, greasepaint. The white base is a traditional rice powder based recipe that’s also commonly used by Geisha. So, obviously, that got me thinking that wearing greasepaint every day, the old 8 stage cleansing routine that we’re always told that Japanese and Korean women use must be handy. Minori was actually smiling at this and says that she uses whatever cleansing oil she has to hand. It does need to be a cleansing oil because of the greasepaint – other removers simply wouldn’t be able to cut through the heaviness of it.  She’s lucky that she has naturally good skin that can take a regular coating of greasepaint and she isn’t troubled by her complexion at all.

Her lashes, which are really long and striking, are custom made by Minori herself. She buys three pairs a time and then modifies and builds them up to the exact look she’s after.

I wondered why Minori wanted to express herself this way. She told me her beaut look is one that came initially from following Lolita fashions and she felt her face didn’t match the clothes she was wearing. Lolita fashion is part of cosplay (roughly, costume wearing) and it’s a specific look with a lot of lace, Mary Jane shoes, and hair bows – child-like Victoriana. From Lolita, gothic Lolita has evolved as a subculture, but Minori has adapted even that extension of the trend into something nature inspired and highly individual in a broken doll kind of way.

It’s certainly disconcerting. Partly because the white paint eradicates expression; her eyes are hidden by enormous, feathery lashes in brown rather than black, and even her gestures are manicured into coy and delicate hand, arm and face movements. This is a girl who lives her look; she’s pretty much the ‘face of’ the Shironuri beauty and fashion movement so I guess she has to. The gothic element – ruffles, bows and lace – has a feel of decay somehow and yet, the intricate petals and leaves immaculately hand drawn on her face are all things living and vibrant.

My final question to Minori was whether she ever got recognised (she is well known in Japan) when she wasn’t wearing her makeup and clothes. So far, she never has. It’s a funny thing, but when I questioned her about makeup, as opposed to stage paints, she really wasn’t especially interested in it which made me realise that it’s the theatre of Shironuri that Minori has embraced, rather than the beauty aspect of it. I would love to see a MAC Minori collection! Either way, what a pleasure it was to meet her – such a sweet girl with a very individual look that she’s made her own.

Minori works with photographer Teppei Takazawa and their work is on Minori’s site HERE. You must look!