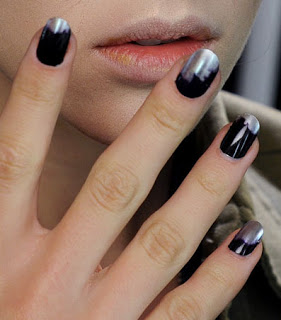 Have you ever wondered exactly how the fashion nails seen on the catwalk arrive on their leggy host? It’s not by accident or the flick of a trend shade, but rather a creative process that starts in a similar way to a fashion clothing collection. And, because designers are notoriously last minute in their creativity, a good nail artist has to be able to bring something to the table at the drop of Chanel Le Vernis bottle.

Marian Newman is someone I’m admiring a lot at the moment because her designs just get better and better. She’s shared how she arrived at the beautiful tips for Alexander McQueen A/W2011 with the most basic of briefs, and with little time to spare. Marian’s brief in creating the custom nail fashion for the catwalk was ‘ice queen/snow’. Yep, that’s all. So, there are a few fairly obvious ideas – blue nails, sparkly white nails, frosted nails etc, but on the catwalk something a little ‘out of the box’ is always needed. Researching visuals that she thought captured the briefest of briefs, she forwarded references to Janice Jordan of Minx. A few phone conversations later and Janice had creative ten Minx templates using agreed images. One Marian had received them, she created an ‘option board’ with each design having an opaque, matte and glossy version as well as transluscent versions for layering.

Arriving at the show to prep the models, the Alexander McQueen stylist, Camilla Nickerson reviewed all the options (even trying some on herself) and plumped for a design called Crystal Cave. This was actually inspired by a photo taken by Marian herself of a view from an ice cave (although she doesn’t share exactly what she was doing in an ice cave in the first place!).

The final look was achieved by applying a top coat of Minx that was a translucent replica of the snow cave visual with black fading to silver applied over a flat silver base on an oval nail.